In this first article we will talk mainly about THE LOST WAX SCALE MODEL AND CORE.

The first step in creating a lost wax casting work has always been to make a small scale model of the artwork. Here at Fonderia Artistica Di Giacomo we can make these models if the artist provides us even with just a drawing or small sculpture.

After making the scale model, the so-called “core” is modelled. The core is a sculpture in the original dimensions usually made with clay and usually with an armature. Generally it is solid to prevent cracks.

Our fine art foundry has introduced some innovations, such as making this first negative, or cast, using synthetic resins instead of clay. These resins lend themselves to a better modelling process, which much improves the rendering of the idea proposed by the artist and makes the cast more authentic.

Subsequently, the core is fired, which results in a slightly reduced size of this negative.

The reduction in size may seem to be problematic but in actuality it is advantageous because it allows the continuation of the technique and realization of the artwork.

In fact, after firing is completed, a layer of wax is applied to the core, which again produces a negative, but this time in the desired dimensions.

This lost wax, as we will see in the next article, makes a cavity that will allow the bronze to form the sculpture as desired. 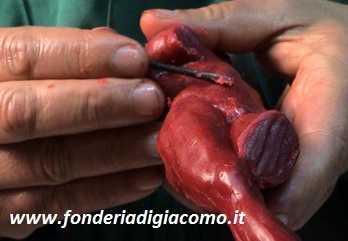 The Ancient artistic Giuseppe Di Giacomo’s foundry occupies to transform the artworks of sculptor, artists and architects in metal from a received model. Furthermore offers his services to all art lovers that desires to see realized in metal a proper idea, a proper sketch or a photo.

Ancient Giuseppe Di Giacomo’s foundry represents, from over a century, an authoritative voice of a universal message to transmit the values of ancient arts to modern generations.